Situated in Banat and surrounded by Vojvodina plains, Zrenjanin is the city of bridges, youth, sports, culture, interesting architecture and people of more than twenty nationalities. The history of this city is seven centuries long, but today Zrenjanin is open to investments, new ideas and innovative ways of doing business and that’s why it is sometimes called the city of the future.

Apart from the distinctive look of the cities in Vojvodina, Zrenjanin can also be recognized by the great number of religious buildings from different periods, cultural and historical monuments, successful athletes, famous puppet shows and an interesting event called “Dani piva” (Beer days).

Zrenjanin is a city which propagates international tolerance and multi-confessionalism and which pays great attention to culture and art. Apart from spectacular theatrical performances, Zrenjanin is also famous for its choirs of worldwide renown and aquarelle art colonies. Most of the buildings which adorn the streets of this city were built during the 19th and 20th century and they represent important historical and cultural monuments as well as distinctive tourist attractions.

The oldest written records of Zrenjanin, which was then called “Veliki Bečkerek”, date back to the 16th century, it was a fairly large village mostly populated by Hungarian farmers. The city was under the Ottoman rule from 1551 to 1717. After the First World War Bečkerek alongside Vojvodina became a part of the Kingdom of Serbs, Croats and Slovenes. The city’s name got changed to Zrenjanin in 1946, in honor of, the national hero, Žarko Zrenjanin. 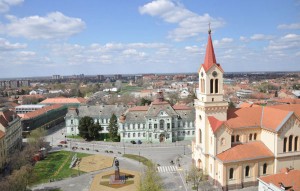 There is a neo-baroque building from 1820 in the very center of the city on Liberty Square, which has always been the symbol of Zrenjanin. The City Hall, once known as the County Palace, was built by Josif Fisher, as a representative of economic power.

There is a famous, one hundred years old, yew tree in front of this building with an interesting exterior and whose interior is decorated by stained glass, pink marble and a labyrinth of corridors and staircase which connect around 135 offices. The great baroque hall is especially interesting.

Near the City Hall, there is a cathedral, recognizable by its steeple and red roof. It was built in 1868 in the style of neo-romanticism and its patron saint is Jovan Nepomuk. It has many beautiful frescoes, stained glass windows and an organ. The roof is painted with the scenes from the New Testament, but the copy of Da Vinci’s “The Last Supper” attracts the most attention. 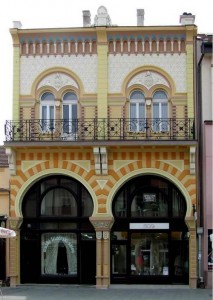 Some unusual buildings from different periods are located in Kralj Aleksandar Street, which is the oldest and most beautiful street of Zrenjanin.

Passing through these streets you can enjoy the variety of styles, interesting facades and buildings, whose appearance will lead you back in time.

One of the most representative buildings in the city’s center is the house of a stonecutter Teodosije Tuner nicknamed “Šeherezada”, the most distinctive feature of the house is its polychromatic facade.

Palace of Justice is the building of extraordinary historical, architectural and ambiental value, in which the court and the jail are situated, dominates the landscape around the lake and The Little Bridge.

Looking at this building and its magnificent palace-like exterior from whichever side will provide you with a unique sight. It was built by architects from Budapest to serve the purpose of a judiciary building and in 1991 it has been proclaimed the cultural monument of the great importance.

If you happen to find yourself in this city of diverse cultural styles, religions and languages don’t miss the opportunity to visit the Piarist Church, Uspenska Serbian Orthodox church and the Reformed Church. If you love history and art you should visit the National museum and the gallery of contemporary art. Openness, hospitality and international tolerance of this peaceful town in Vojvodina will make you feel as comfortable as if you were at home.

It is one of the most significant and most visited tourist and business events in Serbia. Beer days festival is held annually, during the last week of August, and it was established in 1986. This is a city fair which combines cultural, sport, entertainment and business content. During the festival you can try more than twenty different beers, enjoy rock concerts or “tamburitza” music, and taste many culinary specialties and so much more.

How to get to Zrenjanin?

When you are already here, don’t miss…

„Stari Begej-Carska bara“, special nature reserve – where you can enjoy bird watching and wildlife viewing, canoeing and boat rides or take a tour on “Carska lađa” tourist boat. Experience a unique adventure which includes sightseeing, photo safari and so much more.

Spa Rusanda located 17 kilometers north of Zrenjanin is a well-known resort, with a tradition of more than century and a half of healing with curative mud from Rusanda Lake. The entire resort is situated in pine and linden forest and it is crossed with paths for strolling and recreation.

Ečka is only several miles away from Zrenjanin, and it is the town of rich historical heritage and many interesting tourist destinations. Certainly, the most attractive one is the castle named “Kaštel” build in English style by the family of counts in 1820. Today it is highly ranked luxurious hotel attracting many tourists, while its surroundingsstand as a silent witness of richand turbulent history created in centuries that passed.